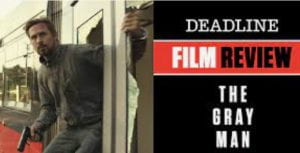 One review of The Gray Man says, “The Gray Man is a story about assassins who are, we’re told, the very best in the world. And yet over and over again, they are shown to be shitty at their jobs. They incite international incidents. They wage small wars in town squares. And they have a very hard time holding a small girl hostage.” The reviewer, Joshua Rivera, notes that the plot for The Gray Man is tried and trite; of a protagonist who’s boss seeks their demise, as in The Bourne series. It is so easy to fall into a plot like this and (shh, just our secret) I almost did this the other day too. I prefer simple plots with complex endings that surprise the reader, but would never want you to know this. [Postscript: This movie is full of action—so much so, that one popular review says, “Sometimes it seems like everybody in hollywod (sic) has forgotten that things don’t have to happen on a massive scale to be interesting.”]