We had a friend staying with us recently who told us about his fear of driving through a car wash. He had a bad childhood experience which surfaces when he has to lock the car doors and look out at the swishing of water and rollers. In my new thriller, the crew of a submarine face their greatest fear—the fear of breaking up at depth; a depth that is a secret known only to a few. If you ask a submarine captain how deep they can go, the answer is always “deep enough.” If you ask the engineers who designed it, they will say “a little deeper than the specs.” Can you imagine the horror of being in a steel tube that implodes underwater; the sudden implosion that ends life in an instant. Worse is the gradual squeezing of a hull under pressure; a tightrope of fear that envelops sailors and drags them closer to the gates of hell.

“A jolt shot through the hull, pinging like a hammer on steel. The sailors jumped. Some crossed themselves, while others kissed their crosses. Every hand on its controls was a fist of white knuckles, clinging to their fears. Each foot deeper brought them closer to the gates of eternity. The hull had to give. One false move and it would be over, and Hammerhead would join the long list of subs lost at sea with all hands.” [new thriller, pg 99] 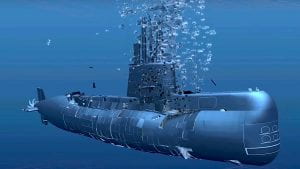