Spy Chase is described as a “Contemporary Thriller.” What does “contemporary” really mean?

I really like the last definition of “the tension and complexities of our contemporary society”. Spy Chase is set in the present and even mentions (as part of the dialogue between Jak and his sister Nina) the election of Boris Johnson in Britain, and the impeachment of Donald Trump. Of course, Jak and Nina could also have discussed the breakup of the Royal Family, with the departure of Prince Harry and Meghan from “The Firm.” They don’t for two reasons. First, Harry and Meghan are not political leaders and, second, this detail about the royals would not add anything further to the plot. Or could they? (LOL).

To celebrate the New Year, Spy Chase is available for free on Kindle for two more days! Enjoy this opportunity and tell your friends too. 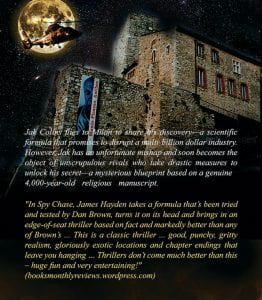 You find an interesting book on the shelves and, after a glance at the front cover, flip it over to get more in-depth information on the back. For Spy Chase, this has been a work-in-progress. The goal was a brief ‘synopsis’ to attract readers, but also to highlight the excellent review – now standing out in a different color and with italics. Is this selfish promotion? Probably, but what counts for me, as the author, is when I get such encouraging feedback from readers. Last week, a friend (who loves her books) raved about Spy Chase and how she loved the mix of detail and the fact that she couldn’t put it down. This is a common theme and my goal was to include a review on the rear cover that conveyed this kind of reader-reaction. 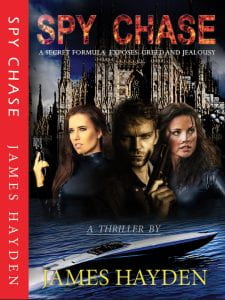 Tension can mount in surprising ways when you discover that you have been taken captive. It happens in SPY CHASE in Chapter 43, when Louie burst into song; a classic French tune. He sings a poor rendition, but this only highlights the jibes he directs at his new passenger as they navigate twisted mountain roads towards St Paul de Vence – an old medieval hilltop town on the French Riviera. Louie’s antics add to the mounting tension. I hope you enjoy the song, and the rough ride, as much as Louie did:

What is the kick-starter to a new novel? For me, it was the clear head and fresh inspiration I soaked up when traveling to new places. SPY CHASE lay dormant for too long, until the spark to get writing began after a few days in southern France. I am not sure exactly what it was, but I needed to be in the surroundings that formed the basis for this thriller – to soak up the details required to be authentic in the novel’s details. Some might argue that the details don’t matter – after all, it is a novel, right? Not for me though. I simply wanted to be able to put my readers into real situations and genuine locations, even down to the colors and scents that I embraced during this writing adventure. I am now in the process of working on thriller #2 but will again need to see and feel the atmosphere and specific features of new locations. Well, I must get some fares booked soon before it is too late to get started!