My new thriller leans upon a short video presented by Apple when they launched the MacIntosh computer. The concept is far from new, but dramatic in presenting Big Brother in black and white, then shattering the conformity when an athlete hurls a hammer into the screen. Let’s take a minute to view this:

Big Brother is a fictional character and symbol in George Orwell‘s dystopian 1949 novel Nineteen Eighty-Four. He is ostensibly the leader of Oceania, a totalitarian state wherein the ruling party, Ingsoc, wields total power “for its own sake” over the inhabitants. In the society that Orwell describes, every citizen is under constant surveillance by the authorities. In modern culture, the term “Big Brother” has entered the lexicon as a synonym for abuse of government power, particularly in respect to civil liberties, often specifically related to mass surveillance. (source: Wikipedia). In my new novel, a group of talented underwater experts plan to turn the tide on a contemporary Big Brother through the most audacious heist ever. 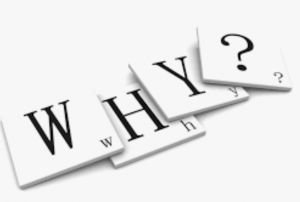 Motive is the glue that holds a thriller together, and keeps the plot racing to its conclusion.

In my new novel, I required a glue strong enough to sustain an outrageous heist; a glue that provided background for the characters, and helped them ‘stick’. Here is a sneak peak from page 15;

“In his 1949 novel, Nineteen Eighty Four, George Orwell feared a controlling Big Brother would conceal the truth from us.  In his Brave New World Revisited, Aldous Huxley suggests our Orwellian dystopia is created by too many distractions.”

“In short, we’re overrun by messages; bombarded by endless data coming to us via the internet, mobile devices, and television. We’re lost in a sea of virtual, fake news. It becomes impossible to see what’s important, or even what’s real. We’re drowning in a rising tide of irrelevance and, since COVD-19, accelerated social regulation, telling us when to stay home, when to shop, how to socialize, when to be inoculated, and when and how we can travel. The loss of civil liberties is the first sign of a totalitarian regime.”

I would say that a global race to an Orwellian dystopia, with increasing social control, is high motive for action against it?

I came across a wonderful quote recently, by Gloria Gaither. She said, “You need to have ideas bigger than your life.” How profound and how ideal to sum up a writer’s goal. Novels, like paintings, can lift us above the ordinary and create worlds far bigger than our own lives; far longer than our histories and far removed from our world. Thank you, Gloria, for inspiring us to have ‘Ideas bigger than our lives’!

Searching for a Literary Agent is a bit like looking for your home in a snow storm. Why ‘home’? Because I am looking for an agent who fits me—who enjoys my writing and connects with me and wants to promote my work; the kind of agent who would feel comfortable at my place, and enjoy my company and conversation. For the textbook I wrote, the agent (and publisher) was professional, yet warm, and had a sense of purpose with humour. I liked that and it helped me stay on track and meet deadlines. Do I have an agent for my new book? Not yet, but I am hopeful for one soon. You, dear follower, will be the first to know! Meanwhile, I keep looking, which involves researching potential agents—looking up their profiles and youtube videos and twitter accounts, etc. to find the right fit. More on agent searching soon! 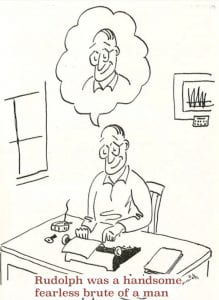 How does an author find their characters? Here’s a clue—look around you when out and about, at the cafe or while shopping. Everyone you meet and everyone you see has the potential to be a character in your novel! I have used friends and even people sitting opposite me on a train (well, their shoes got into a novel). You can have fun when writing to invent a character who is a blend of a few people. Take someone’s nickname, another’s hairdo. Add a dress from a shop window, and a handbag from a google search. Next, add some details—a hook nose, bald head, unshaven, tattooed, limping, sunken eyes, etc. In my new novel, one of my characters wears lots of yellow. This may not seem significant, but it does later in the book when Sir Christopher Jenson (based a someone close to me) discovers a woman wearing yellow who is cuddling up to another character who has just lost his wife in a skiing accident. Yellow connects these two women for the reader and…I can’t tell you what happens! 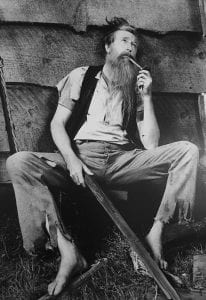 Looking for inspiration for my next novel. Hmm, something’s in the pipeline already!

Novel #2 in Editing Mode: Such a relief to finish my second novel, which is now in the final editing stages. In summary: 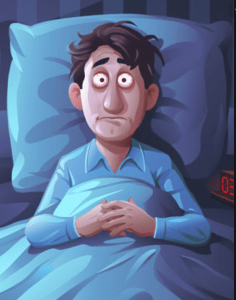 The other night I could not get to sleep and tossed and turned, mulling over my second full edit. I realized that I had made a minor continuity error and had to get up to fix it. Phew!

It really is encouraging that my brain is actively working on improvements all the time, even when half asleep! Motto? 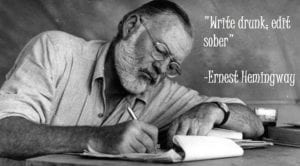 This quote by Ernest Hemingway has an element of truth, although I certainly don’t ‘write drunk’. What rings true for me, though, is that you don’t have to be fully ‘with it’ when getting the rough story down. It might be a matter of grabbing a few minutes between meetings or, in my case, while waiting to teach a class. Some of my better writing seems to happen when I am mulling a plot or ‘what’s next’ while trying to sleep. In this case, I have to put the light on, get up and type the inspiration, just in case I forget when I wake up in the morning.Or, I might overhear a conversation while out and about and need to jot a thought down, ready to take back to my computer to bring into the story. For my second novel, I also set aside regular, early morning times to write. And, in the most part, I have kept to this schedule, even if the word output varies. On a good day I will type up about 800-1200 words and, on a bad day, 400-500. But, even the bad days can be good writing!

However, the editing needs time and concentration, plus a critical analysis of words, sentence structure/length, etc. Therefore, Hemingway is right—it is best done while ‘sober’. Incidentally, Hemingway also has a cameo part in my new novel, when two ladies meet an old man on the Croatian coast in a bar in Dubrovnik—the kind of place that Hemingway would, I am sure, have enjoyed!

My new novel is now ‘finished’ and what a relief after much travel and months of research. I say ‘finished’ metaphorically since this is only the draft manuscript—a rough version with completed plot. Now I am enjoying the task of reviewing the draft, making corrections and adding/deleting to improve the flow, etc. However, it is quite exciting to be so close to the final copy, and I hope to be finished in about a week. After that, I will have a few people read through and feedback comments. I very much value this part of the process before seeking a publisher, simply because fresh eyes can pick up small errors and suggest improvements that I may have missed. How happy am I with the new book? Hmm, time will tell. However, I can say that I am pleased with the plot. It was quite strange this time to figure out the final chapter when only about one third of the book had been written. Now that the plot has caught up, the last chapter only needed a few added details to make it work well. If you are interested in a peek of this new novel, or would like to add your name to an early release, please drop me a note.

I wasn’t really envious – well, a little! A friend was now writing his 3rd book and I was struggling to make progress on my #2. But, I reassured myself, Rome wasn’t built in a day and, besides, mine was more technical – requiring considerable research. And, I had no research assistant! The funny thing was, although about half-way through novel two, I had the last chapter sorted. Then, smug, smug, I was sure that I had gone well past the middle when a word count (hate that tool) revealed that I had only completed 32,000 words. Dang it! Still, this wake-up shook me into being more disciplined and, I am proud to say, my writing has improved. I am now into a routine of morning writing, followed by a quick evening review. I also determine to try and keep my weekends free – in the same way as I did when teaching.