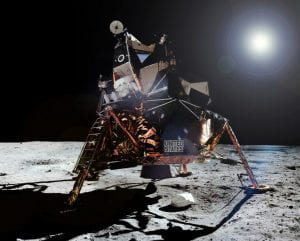 On July 20, 1969, Following their famous moonwalk, Armstrong and Aldrin discovered that a one-inch engine arm circuit breaker switch had broken off an instrument panel. This breaker was needed to send electrical power to the ascent engine that would lift the two off the moon. The broken switch was reported to Mission Control, but its experts had not identified a solution by the next morning. Without a fix, the two men would have been stranded on the moon.

Aldrin thought a felt-tipped pen in the shoulder pocket of his suit might replace the broken switch. He wrote later: “Sure enough, the circuit breaker held. We were going to get off the moon, after all. To this day I still have the broken circuit breaker switch and the felt-tipped pen I used to ignite our engines.” That, dear readers, is the power of the pen. And, as you lift your pen or hit your keyboard today, let it break any circuit-breaker in your writing and inspire the next paragraph, the next chapter, and the next book to take off.