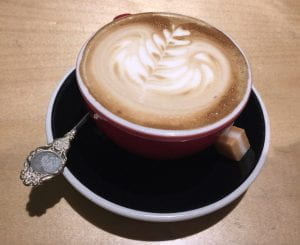 I was having coffee yesterday with a friend of mine. We met at a cafe called Victoria’s. I love the fact that a cafe is named after someone; it is personal and warm, and popular during these school holidays. I arrived early, found the last table and checked my messages before my friend arrived. When he did, I offered to shout him a coffee. “Flat white,” he said. Mine was a latte. These details may not matter, but they could to a reader. Check out the saucer. It includes a sweet and uses old souvenir spoons. Homely and warm, just like our conversation. My friend had been a policeman for many years. When I asked him about the dead body he said. “You can also have a body of water?” I agreed, but would you have a body of water in the river?

When you write, little things like “a dead body” suddenly leap into importance. And, since all thrillers have bodies, this could be of utmost importance? I wondered about other body options;

“a body of dead water”

“the dead of night”

When I went back to the news article, to include a link to it for this post, it had gone. So now I have a “Missing body” which I assume is also dead? Meanwhile, we enjoyed nice coffee—full-bodied coffee I might add.