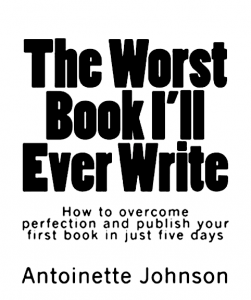 Don’t you love this book title? I remember reading somewhere that an author’s first book is ‘always their worst’. I loathed that thought and was determined to disprove it. Yet, the final draft of my first book was so rough that I had to completely re-edit and improve it.

After a period of time I discovered that my first book, although well received, could have been much better. I had moved on and so had my writing. As someone posted, “Ten years ago you thought you were doing alright. Now, today, you may look back and cringe at your hairstyle or the clothes you wore or the way you acted and thought. I was terrible! you might say, but at the time you didn’t realize it…First books can be similar…Two books or a few years later you can see how much you’ve grown and cringe at the first attempt. If it’s bad let it be bad and grow from it. Don’t let its potential to be bad keep you from moving forward.”

A great post and one I can connect with. What did I learn from my ”first book experience”?