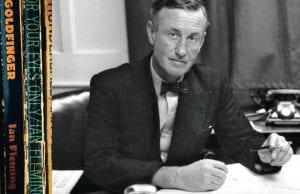 “I have a charming relative who is an angry young littérateur of renown. He is maddened by the fact that more people read my books than his. Not long ago we had semi-friendly words on the subject and I tried to cool his boiling ego by saying that his artistic purpose was far, far higher than mine. He was engaged in “The Shakespeare Stakes.” The target of his books was the head and, to some extent at least, the heart. The target of my books, I said, lay somewhere between the solar plexus and, well, the upper thigh. These self-deprecatory remarks did nothing to mollify him and finally, with some impatience and perhaps with something of an ironical glint in my eye, I asked him how he described himself on his passport. “I bet you call yourself an Author,” I said. He agreed, with a shade of reluctance, perhaps because he scented sarcasm on the way. “Just so,” I said. “Well, I describe myself as a Writer. There are authors and artists, and then again there are writers and painters.”

This rather spiteful jibe, which forced him, most unwillingly, into the ranks of the Establishment, whilst stealing for myself the halo of a simple craftsman of the people, made the angry young man angrier than ever and I don’t now see him as often as I used to. But the point I wish to make is that if you decide to become a professional writer, you must, broadly speaking, decide whether you wish to write for fame, for pleasure or for money. I write, unashamedly, for pleasure and money.” by Ian Fleming

One thought on “Author or Writer?”