James Patterson is one of the world’s most successful authors, having sold roughly 450 million books – thrillers, non-fiction and romance novels. He was the best-selling author of adult fiction in the UK in 2020, according to Nielsen Book Research, and was recently announced as the most-borrowed author from British libraries for the 14th year in a row [source: BBC].

In a recent interview on Late Night with Seth Meyers, James Patterson says, “I always imagine someone’s sitting across from me. I’m telling them a story and I don’t want them to get up until I’m finished.” Great advice from the master and I hope each chapter I write keeps my imaginary reader in their seat. 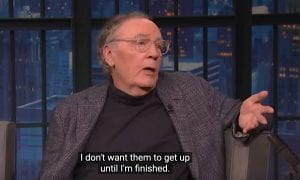 Here’s a couple of openers from well-known thriller writers;

“Sam Harrison swung his agile body out of the silver blue Ford Aerostar, which he had parked ono Q Street in the Georgetown section of Washington.” [Jack and Jill by James Patterson]

“Duke Russell is not guilty of the unspeakable crimes for which he was convicted; nonetheless, he is scheduled to be executed for them in one hour and forty-four minutes.” [The Guardians by John Grisham]

Only two examples, but both start with the name of the main character/protagonist and both give a sense of place – Washington for Patterson and a prison(?) for Grisham. I prefer the urgency and mystery given in John Grisham’s opener, for two reasons; first, there are ‘unspeakable crimes’ which ups my interest; second, time is running out. A third reason could be that we owned a Ford wagon a while back and we were not that thrilled with it (LOL).

In my new novel I hope the opening line grabs the reader’s interest by suggesting tension, introducing a female character and creating a need to find out who is being followed and why. It reads;

“You are being followed,” she whispers.

I love this comment by Dawn Schaefer on the opening lines of Tinker, Tailor, Soldier, Spy by John le Carré; “There is the sense of having been dropped into the middle of a conversation, and a gossipy one at that...” And what, you will no doubt ask, are these lines?

“The truth is, if old Major Dover hadn’t dropped dead at Taunton races Jim would never have come to Thursgood’s at all.”

Now that we are on about Carré, here is my favorite opener (from Call for the Dead);

“When Lady Ann Sercomb married George Smiley towards the end of the war she described him to her astonished Mayfair friends as breathtakingly ordinary.”